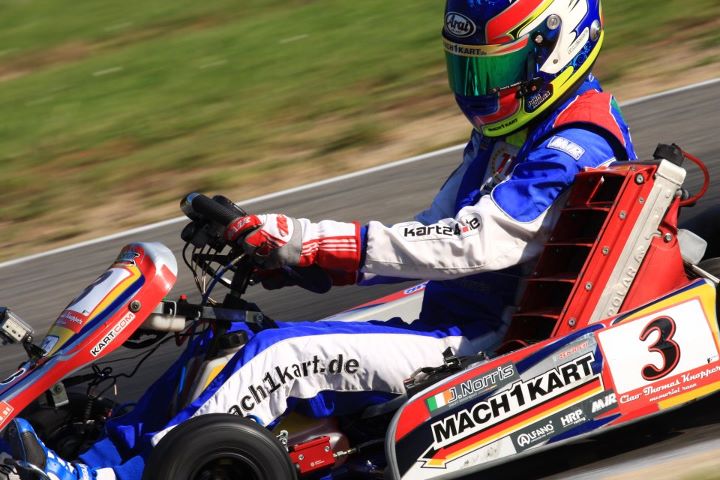 Two major events awaited the Mach1 Motorsport team last weekend. While John Norris decided the Graf Berghe von Trips Memorial in Kerpen in his favor, as many as ten drivers fought for victories at the ADAC federal final race in Wackersdorf. In this race, Alexander Heil dominated the ADAC 125-ranking.

The first weekend of October was a successful one for Irish John Norris. The driver participated in the old-established Graf Berghe von Trips Memorial on the Erftlandring in Kerpen and was able to prove his driving abilities once again. During two exciting races he managed to stay at the front and achieved two invulnerable victories. Therefore he could stand on the podium as the overall winner on Sunday evening and was duly celebrated for his success. Team leader Martin Hetschel was very happy about the result of his protégé: “John was fast during the entire year, but had bad luck again and again. This time, everything went smoothly and he was able to defend his first place until crossing the finish line.”

The team at the ADAC federal final race in Wackersdorf was not less successful. The best drivers of the four ADAC regional series met on the beautiful site in Upper Palatinate and fought for the federal victory. Not less than ten drivers trusted in a Mach1 chassis.

Tim Schröder started as a soloist in the ADAC gear class with the combination Mach1/Debei. The experienced driver was able to gather momentum with his material throughout the course of the weekend and proved this with his results. After coming in 17th during free practice, he was able to improve his performance during qualifying to 14th position and even finished the first race on 12th place. Unfortunately, he was stopped during the finals by a torn linkage, which caused him to fall back considerably in the overall ranking.

In the ADAC 125 class, Alexander Heil started as the hands-down favorite for the title. After his overall victory at the WAKC, the IDS Kartsport team’s driver also managed to dominate the events in Wackersdorf. He started the race from pole position and was able to build an advance that consisted of more than seven seconds during the first race. During the finals, he was able to up the ante even more. Alexander left his competitors far behind once again and finished the race with an advance of more than eleven seconds. His teammate Udo Dumke was very successful as well and secured the seventh overall position after two hard-fought final races.

“All of the Mach1 drivers did really well this weekend! I want to use this occasion to thank all of the drivers, teams and merchants once again for their commitment and their loyalty. I’m already looking forward to further great races during the next season. There will also be more to come for Mach1 Motorsport this year: The DKM finale in Kerpen, the Bridgestone-Cup in Lonato and the final round of the U18 championship in Sarno are still on our agenda. During the winter months, we will once again do a lot of test runs in Germany and Italy and would like to invite interested drivers and teams to join us,” Martin Hetschel appreciated the work of his partners.